Posted below is an interesting article from the Connect - Fort McMurray's only weekly newspaper, for your review: 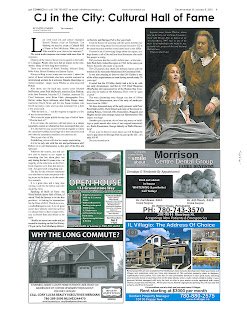 Here is the content of the article, because I couldn't manage to upload a readable image.

CJ in the City: Cultural Hall of Fame
Last week local arts and culture champion Russell Thomas wrote on Facebook “I’m thinking we need to create a Cultural Hall of Fame in Fort McMurray. What say you? Who would be your choices for inductees?” The social media response was instant with more than 50 responses.

Majority of the interest shown was in regards to the builder’s category. People who have had an impact in the community. Many of them long-time residents.

Always willing to toss in my own two cents. I added the names of those individuals who have reached rnational or international acclaim be it actresses Natasha Henstridge or Tantoo Cardinal, singer Laura Whalen or artist Jane-Ash Poitras.

Who the heck is…” was the response in regards to a few of my recommendations.

This is one the major pitfalls for any type of hall of fame. “Who the heck is?”

A lot of times the selection will boil down to a simple popularity contest or who(m) has been nominated that year. It is also hard to stay away from bias in regards to whom the committee had/has knowledge of or been involved with and what the committee members own interests are.

This is just a fact of life.

Establishing criteria will also be a major undertaking. Is it to be only arts with fine arts and performance arts? Believe it or not Gastronomy is also part of the fine arts spectrum.

Whatever the criteria, arts and culture and its impact to our region is something that has taken place not only during the last 30 years or so – as the majority of the selections on the Facebook response were from this time period - but goes back a long long way.

The key for the selection committee is to also have at least one person willing to put in the hours to do the extensive research.

It is a great idea and a long time coming. Look for the ball to start rolling pretty soon.

Speaking of Halls of Fame…the Wood Buffalo Sports Hall of Fame, of which I had the honour to be the first president, is looking for nominations for the Class of 2011. Check out www. woodbuffalosports.com. A lot of great names have already come forward but it’s always better to have a larger selection to choose from and debate at the table.

I finally set some time aside and got around to checking out the Our History CD put out by Fort McMurray Historical Society and Heritage Park a few years back.

I had the honour of assisting with the sports timeline but the really neat thing about this educational interactive CD is the main historical timeline which dates back to the 1600s. I learned a lot of interesting things about our region, so a huge thanks to all of the staff and local historians who made this project a reality.

Did you know that the world’s richest man – at the time – John Paul Getty visited the region in 1962. In the same year Robert Kennedy also made a trip north. The CD journey also shook the memory banks with the mention of Sir Alexander MacKenzie Bi-Centennial Park. It was also amazing to discover that Girl Guides is one of the oldest organizations in town having started nearly 70 years ago! It noted that the O’Coffey family had a lot to do with our early development and that in 1715 Chief Waupisoo (Wa-Pa-Su) told representatives of the Hudson Bay Company that the banks of the Athabasca River were of “gum or pitch.”

The most fascinating story though was that of Alfred Freiherr von Hammerstein, one of the early oil sands pioneers from the 1900s’. We have honoured many of the early pioneers with Peter Pond Mall and Dr. Clark School and many of the streets including Bulyea, Cornwall, Ells, Eymundsen, Huggard, and Hughes but for some strange reason not Hammerstein? His impact was huge.

Another quick question, do we have any streets or buildings or parks named after some of our original homesteaders Emile Fousenauve, George Golosky or Wallis Hunnenberg? If you want to discover more about our rich heritage be sure to pop down to Heritage Park to pick up the CD…it’s only $19.95.

See you around town.

BY CURTIS J PHILIPS for Connect
editorial@macmedia.ca
To get CONNECTed call: 780-790-6627 or email: info@macmedia.ca http://www.macmedia.ca/
Let us know what you think!
Wow! With the added suggested nominations from Russell's facebook discussion, and those mentioned in the above article it is an exciting prospect to think that we could provide some wide spread acknowledgement given to the champions in the realm of Culture. As CJ mentions in his article it would be tough to mitigate the nomination/application and selection process for those featured on the wall. I agree with this, and unfortunately in many cases of "walls/walks of fame" there is an emphasis on general popularity or community knowledge of a given individual, which can permit some truly amazing individuals to fall through the cracks. To me it would be imperative to ensure that all candidates are evaluated through the same criteria, and that the criteria be created with no one individual in mind. This is a tricky feat because no matter how hard we try it is a true challenge to be objective. In short I think that the creation of the criteria itself promises, like CJ's say's "an undertaking", but I also think that it is an exciting and very nessisary one!
In the last two paragraphs in CJ's article he asks about streets, buildings and parks names - inquiring if we currently have any that are "named after some of our original homesteaders". Culture Coordinator Shauna Gale-Colbert was kind enough to do a little research and come up with the following response.
There are many names around our town that represent our heritage. Each name has been carefully selected so that it highlights our community and its heritage. With such a growing, vibrant community there will always be opportunities to use more names for our streets, parks and buildings. There is a Community Identification Committee that takes naming nominations. Its purpose is to establish a sense of identity in the community.

Also, to recognize and honor early explorers, pioneers, and those who contributed to the development of the Regional Municipality of Wood Buffalo. If you look around you will see street names, parks, buildings and historical plaques in the RMWB that have various historical significance. The image below is one of 16 plaques currently located in the urban service area of Fort McMurray. This plaque is located on Athabasca Avenue featuring Alfred Von Hammerstein. Content of other historical plaques include, Hill Family, Gordon Family and the Golosky’s. In the next year there will be another 9 plaques added to the collection.

If you have any questions about the current or upcoming plaques please give Shauna a call at 780.788.4324 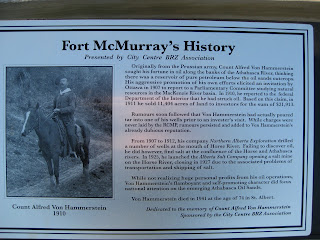 Posted by Culture Coordinator at 08:58